Mr. Cam'ron Class
As part of my ongoing quest to politicize my students I had my kids describe and draw their ideal school and then compare that school to Shitty, thus, hopefully, making them aware of how far from the ideal Shitty actually is.

The results were predictably disappointing. The kids' ideal schools were typically a two-dimensional rendering of Shitty with perhaps the idealized embellishment of a few flowers. Here's an example: 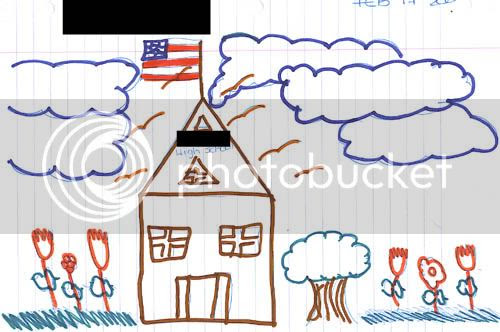 All day long, no-one came up with anything more interesting than having automatic doors or a Jacuzzi in their school, until the tenth and final period.

A feisty young girl named Heidy in whom I'd previously noted a certain artistic aptitude in the Sharpie letter stylings she scrawls all over her desk and notebook; "Bang Bang Girl 171," and the like, came through with some higher order thinking.

"What we gotta do?" she gave me the screwface when I explained the assignment.

She didn't want to participate.

"Good," I told her. "If you hate school, then draw me the kind of school you would like. C'mon. Anything you want."

She mulled that over for a minute and then declared, "I'ma draw the school burned down."

"That's great," I responded a little too enthusiastically. "That's the most creative, original idea I've heard all day! Draw that."

This is what she came up with: 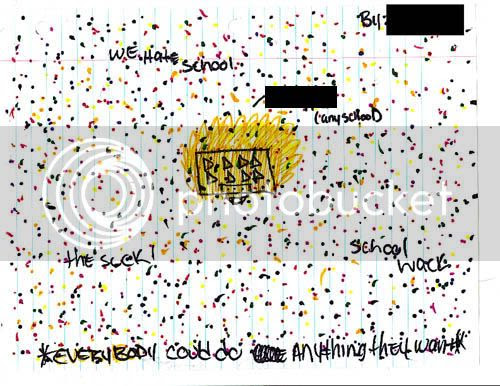 The dots represent all the kids in the world doing "anything they want," after the schools have all been burned. She's a regular Rothko.

Meanwhile Pedro from Harlem, normally one of my more annoying kids, was working diligently in the corner. He conceived of and designed a blunt-smoking, nerd-killing, Diplomats Academy, the Dip-School: 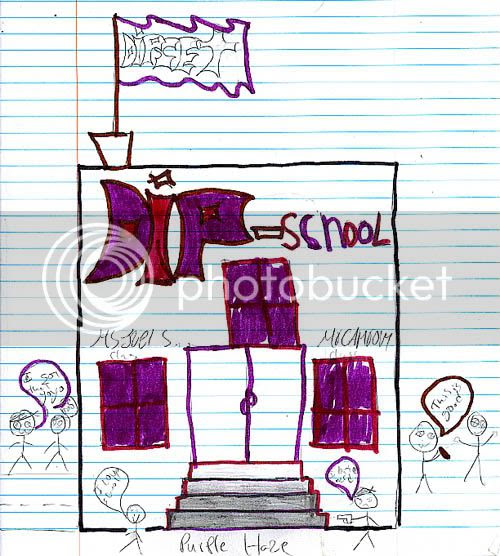 My favorite part is the kid on the left who "Got that Yayo."